skip to main | skip to sidebar

Christmas seasons for our shows have just been announced. If you see any of them let us know what you think!
Composed and recorded music
The Gruffalo at the Apollo Theatre London and Birmingham Town Hall
Room on the Broom at the Pleasance Theatre Islington
Something Else at Chelsea Theatre and Norden Farm Maidenhead
The Snow Dragon at Warwick Arts Centre
Them With Frozen Tails at Camden Roundhouse
Arranged and recorded music
The Life and Adventures of Santa Claus UK Tour
The Night before Christmas UK Tour
Pigeon Party US tour
Posted by Shock Audiovisual at 9:55 AM No comments: 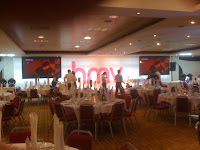 Shock provided full sound support for two recent HMV conferences and exhibitions in London and Warwick.
Posted by Shock Audiovisual at 9:42 AM No comments:

Shock provided technicians, projection and sound equipment for the Miss China UK pageant at the Palace Theatre, London.
Posted by Shock Audiovisual at 9:37 AM No comments:

Shock recently provided a 5 camera video shoot, plus sound recording and live sound for the band Dark Sanctuary at the beautiful St Pancras Church in London.
"Just a quick note to say thank you for all your hard work on Saturday. The band were very pleased with everything, and wanted me to tell you that they thought it was a real pleasure to work with you. The same is true for us - you were friendly, helpful, efficient and professional. What could have been a really stressful and frenzied day was a smooth and sleek event." Sam @ Ascendance Records
Posted by Shock Audiovisual at 9:29 AM No comments:

Shock provided sound equipment and expertise for this year's rather raucous Kerrang magazine awards in Central London.
Posted by Shock Audiovisual at 4:47 AM No comments:

Today's City of London Festival - Shock set up and ran the sound for 3 performances of the Bicycle Ballet in Paternoster Square London.
Posted by Shock Audiovisual at 5:10 AM No comments:

This is the 10th year that Shock have been working with the City of London Festival. We're providing full concert support for many of the festival's events. Our highlights of the first week included a mass Ceilidh on the steps of St Paul's Cathedral, guitarist Martin Taylor and pianist/ singer Ian Shaw playing jazz at Finsbury Circus Gardens and Terje Isunget one of the most accomplished and innovative percussionists in Europe performing at Apothecaries Hall. 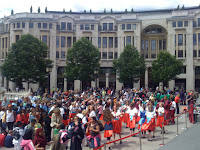 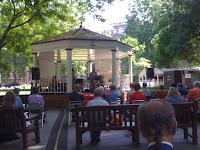 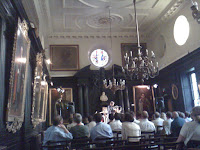 Posted by Shock Audiovisual at 2:22 PM No comments:

Sound for the MOJO awards

"Just a quick note to say thanks so much for all your hard work at the Conference last week, it really did go without a hitch and everyone was so pleased with how it went."

Posted by Shock Audiovisual at 4:22 AM No comments:

We provided live video links to a number of screens on stage and around the theatre, playback of sound effects, music and video cues.

"On behalf of my team, I would like to thank you for your patience and great support at Miss China UK, making this year's Pageant a successful and memorable one. Thank you for your great contribution!"
Posted by Shock Audiovisual at 4:08 AM No comments:

Shock have again worked with long term collaborators Tall Stories on a new children's show called "Room on The Broom". This adaptation of Julia Donaldson and Axel Scheffler's classic picturebook tells the story of a hapless witch who when flying through the back of beyond, keeps losing things and has to fly to the ground to pick them up. Along the way, the witch and her trusty cat meet lots of characters who they agree to take with them. It isn't long before this leads to some serious overloading and an encounter with a hungry dragon! Shock wrote and produced the music for the show which is currently touring the UK and will run in the West End this Christmas.

We also recently provided sound design and technical services for a live tour of "Boogie Pete", a show developed by the BBC and seen by millions on the CBEEBIES channel.


Meanwhile, another classic children's show that we wrote the music for has finally reached the shores of Australia. "The Gruffalo" hit Sydney this week having been seen by hundreds and thousands of children around the world and is already selling out for much of it's scheduled tour around Australia and New Zealand.
Posted by Shock Audiovisual at 3:52 AM No comments: 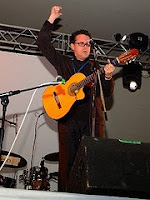 "Just to say a huge thanks again for all your hard work - it wouldn't happen with you - all went really well, another great job!" David Hoffman Limmud Fest Chair 2008

Posted by Shock Audiovisual at 3:27 AM No comments:

Human Resources giant Hewitt Associates, recently employed Shock to record a series of seminars aimed at finding methods for managing and maintaining pension funds. Over a series of 6 sessions in London, Leeds, Birmingham and Bristol up to 6 presnters were fitted with radio lapel microphones and the subsequent recordings archived onto CD's for transcription.
Posted by Shock Audiovisual at 7:22 AM No comments:

A Night at the Portuguese Embassy 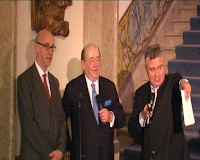 Shock recently provided full AV services for a book launch at the beautiful Portuguese Embassy in London's Belgrave Square. The author of the book, celebrated architect and designer Andre Jordan, was interviewed by Sky TV's Eamonn Holmes. Shock filmed the event and provided screens throughout the building so guests all had a great view of proceedings.
Posted by Shock Audiovisual at 7:12 AM No comments:

"Shock Audio Visual is a real 'can do' company. The team found a solution to every problem we threw at them and provided a professional, reliable and friendly service. Their efforts played a vital role in making our event such a success. We will definitely be working with them again."

"Last night was a great success - thank you immensely for making the film, music, and sound operate so smoothly. We shall be delighted if we could use you again in the not too distant future at one of many of our fundraising events."

"Thanks again for everything you did on the night - it was fantastic...."

Tim Dingle,
Clerksroom Ltd
"Thanks for your help making the event run so smoothly..."

Shelley Salter
The Beacon Fellowship
"Thanks for all the hard work that you put in yesterday to the gig. You really help to make it a smooth easy experience and I love working with you both. Thank you..."